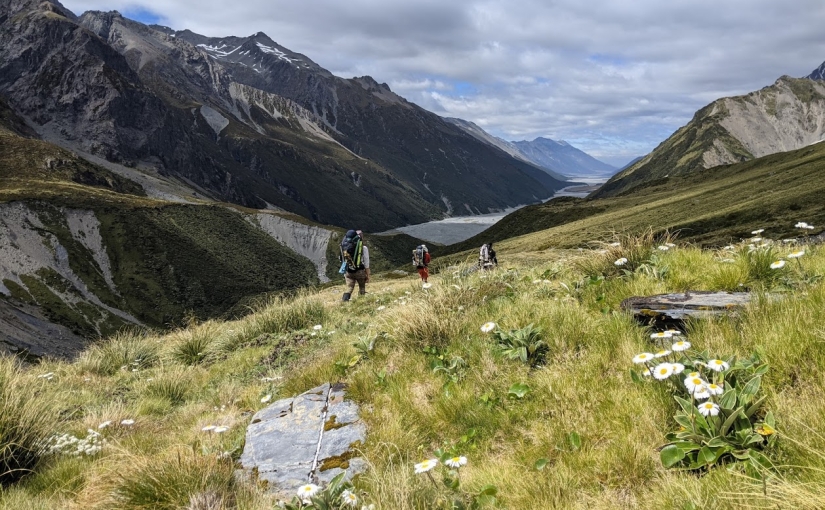 Growing a map of connectivity and love
time  space  imagination  happenings
deeper and richer
as we walk,      sleep,      walk again –
Huddle against storm
or swim in some gurgling pool under a summer sun.

Wasn’t it right by Three Tarn River, that Easter,
that my boot fell to pieces and I had to cross four ridges in just a sock…
Peter met me with another pair of shoes…
Walk,      sleep,      walk 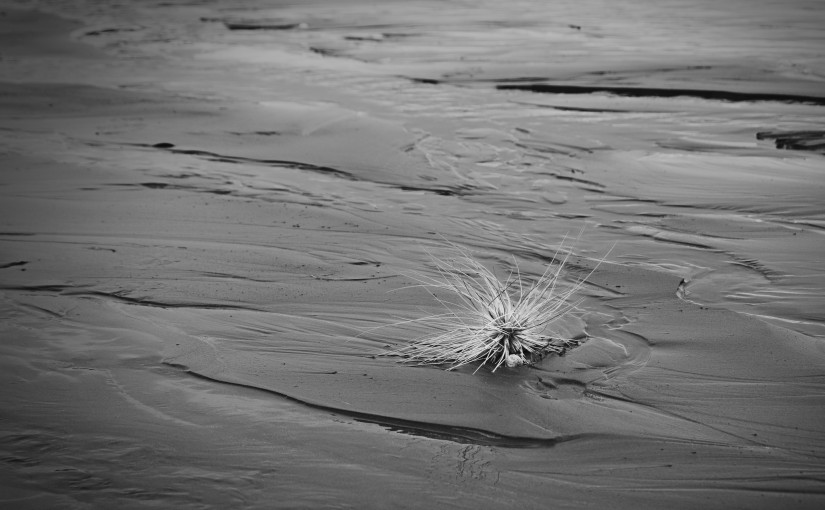 First just one, then two more
Rolling at great speed uphill
and along the ridge
Rally drivers but a thousand times more airy and daring

Three more appear – swooping around the sand bowl
tumble dancing on spidery limbs over and over
They are all heading down to the lake
riding the western rollercoaster wind
swerving like wild skiers on a slalom
with no pause or control – taking those corners
At this speed, they’ll make the olympics
but over the brim, the gale hushes
the dancers run out of oomph
thready legs stumble and mire in sand…

That was it for the day folks
Time for a swim
The child runs in, yelling 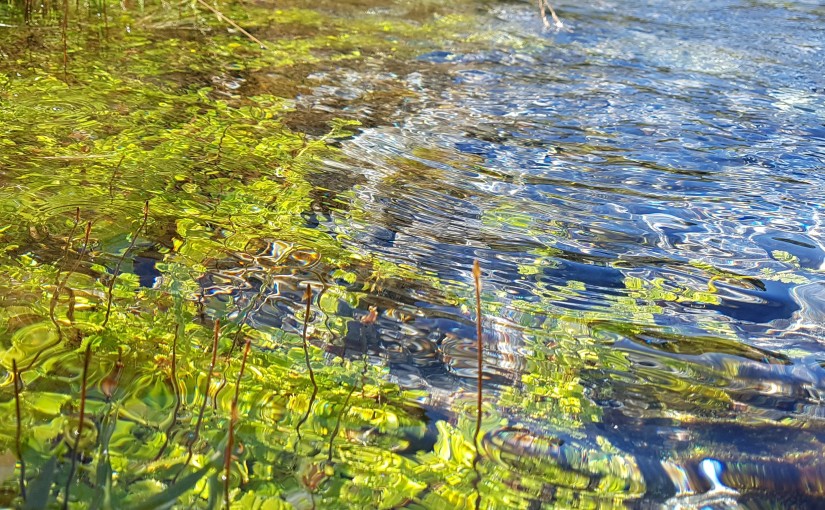 Paired impressions in the dark damp earth lend me downhill.
Someone else uses this place but they are not human.
Someone meeker, possibly pronged.
I discovered this spot a while back – camping out.
A secret stream, hiding in forest and flax, quiet and flecked green and gold with river grass –
criss-crossed with black submerged forest flotsam.
Gaze into maps of golden deep, edged by oceans of dark shade.

Twiggy reflections walk down into a wobbly mazy wonderland of inverted roof.
Dragonflies both red and cobalt blue zoom in pairs or hang, wagging up and down.
It’s hard to reach down to the water.
I have to wedge both feet into recessions in the bank and dip one hand to guzzle the cool water, while hanging off a bush with the other. I’m an orangutan!

Having sloshed down as much as I feel like, I can now pause –
pooled by warm sun, gold water and increasingly damp bum.
A single reed curves out over the surface cupping a hollowed out cove.
Watch that floating bit of stick.
It tries to beach itself going against the reed but is batted away and caught in an eddy.
It circles around past my useful bush, back against the mossy bank and my wedged foot then repeats the process, batting that reed back into the eddy and round again.
Four times it does this.
Look closely and the eddy is made up of a series of spinning whirls of water all circling past the curvy reed and backwards round the hollow like a series of juggling balls or spinning moons orbiting – except they lack a planet.

I’ve been so busy watching the tiny emerging threads of water-mills that I missed the fact that my stick has finally managed to escape and vanish.
But here’s another one, trapped in the same cycle, like one of us doomed to keep facing the same dilemmas and responding in the same ineffectual way –
till eventually mere chance lets us spin off and float downstream to the next adventure. 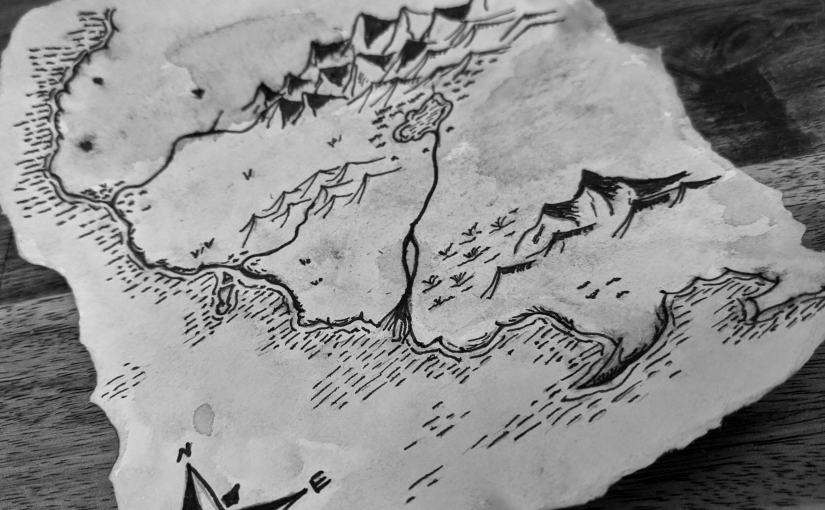 Explorers and pirates we were,
greedy for fresh discoveries and booty.
We documented our finds in careful calligraphy then dipped the finished product in the teapot for the authentic look

Remember the phase of trying to write each other letters
– in code of course –
with seagull tail feathers?
It didn’t really work

Then at night we were cocooned in Grandma’s snug sheets in our red spotty nighties
dreaming of secret passageways or invisible writing in lemon juice
Pesky little flies we were,
into everything and persistently grubby
always hatching up new and potentially annoying plans 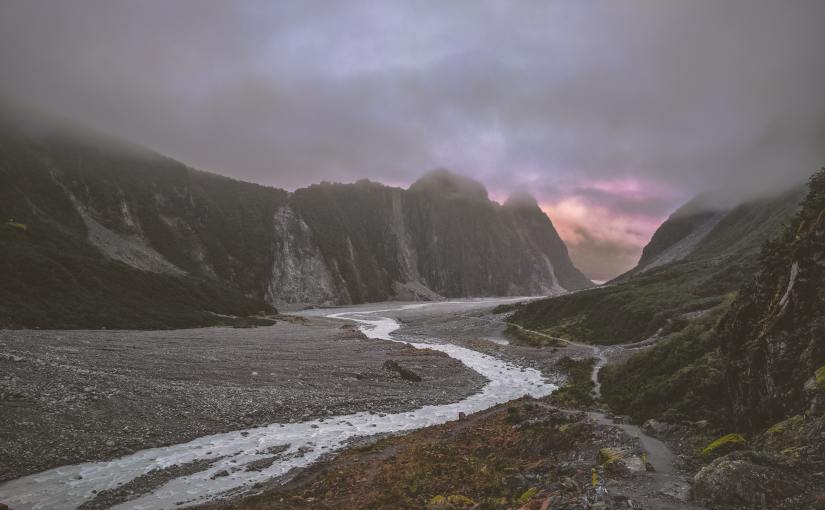 You can pull it out in funnels, ease it out to purring rumbles
or release a tide of silence where the singer is the song
You can spin it out in circles like those children turning cartwheels
on a shoreline rimmed with breakers that the wind has blown along

Feel the fullness now of gravity, that’s warm and strong and thrumming
like a hive of golden bees or honey dripping off a spoon
The potter sends a whoomph of pulse to a wheel that keeps on turning
for a song that’s softly humming masquerading as the moon

It’s a theme that’s full of mischief, unexpected dodging turning
and it won’t conform to anything they’re sending the police
hard hats chasing, music racing and those shoes are getting hotter
It’s a band that’s being arrested for disturbance of the peace

Now it’s heading for the mountains to a place it’s been before
escaping to a land of ice where forest parts like hair
Receiving tangled lines of harmony the moss is sifting, seeping –
the song is like a river combing through the cooling air


From polyphony and harmony we’re down to just one strand
It’s a tune that you can pick out with the fingers of one hand
The stars ping out in blinking chimes as day falls to the west
and the rhythm’s softly sinking, fading out into a guess 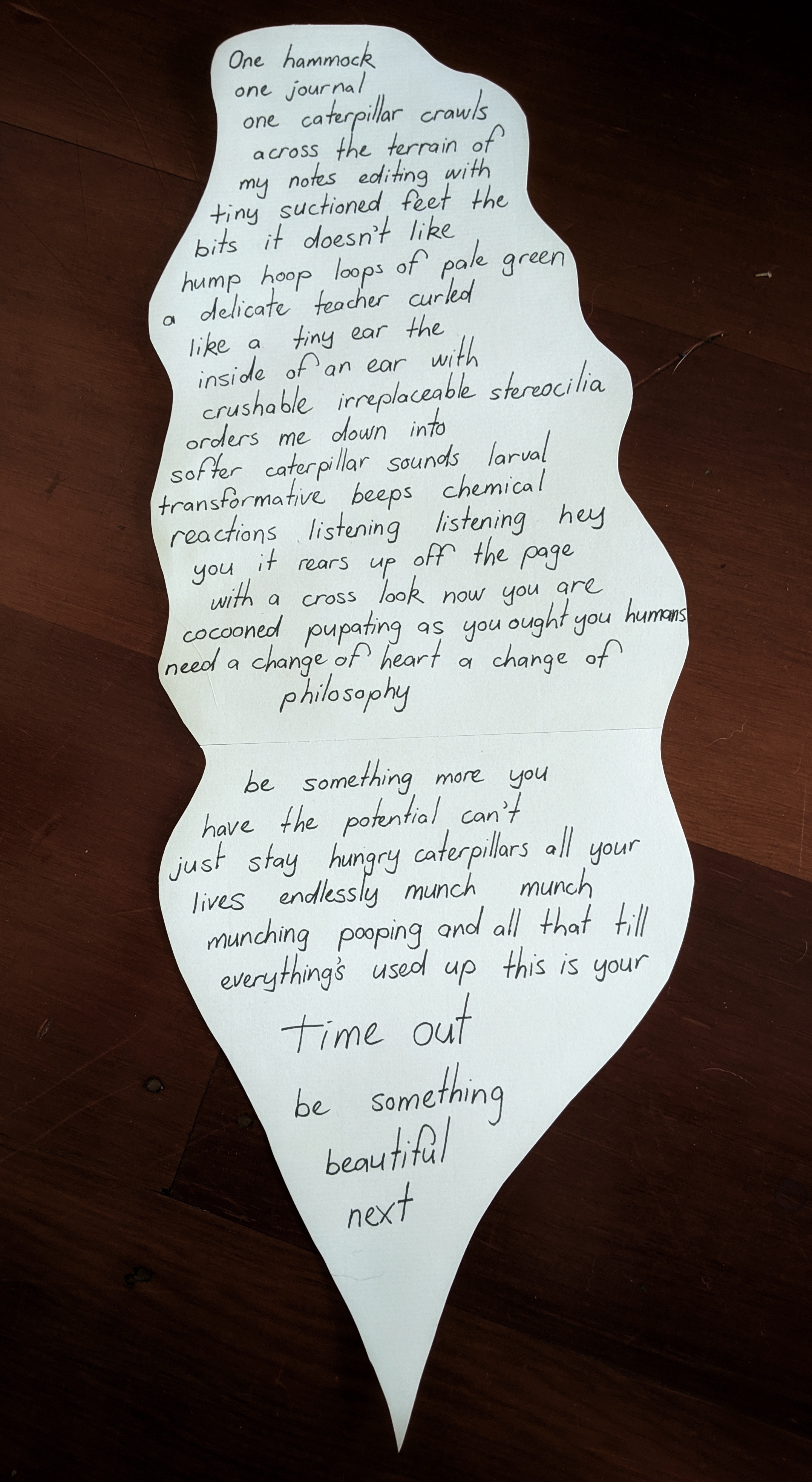 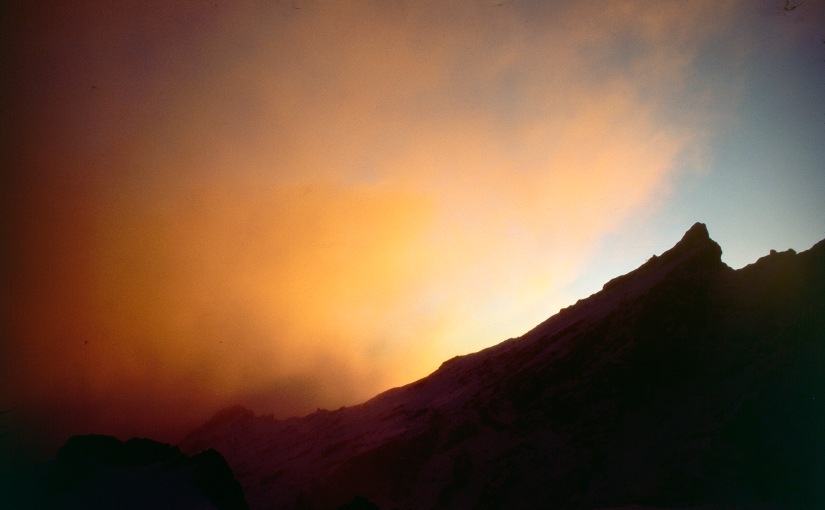 I will put up the red tent under my apple tree
and imagine a new world:

Even the weather must do their bidding 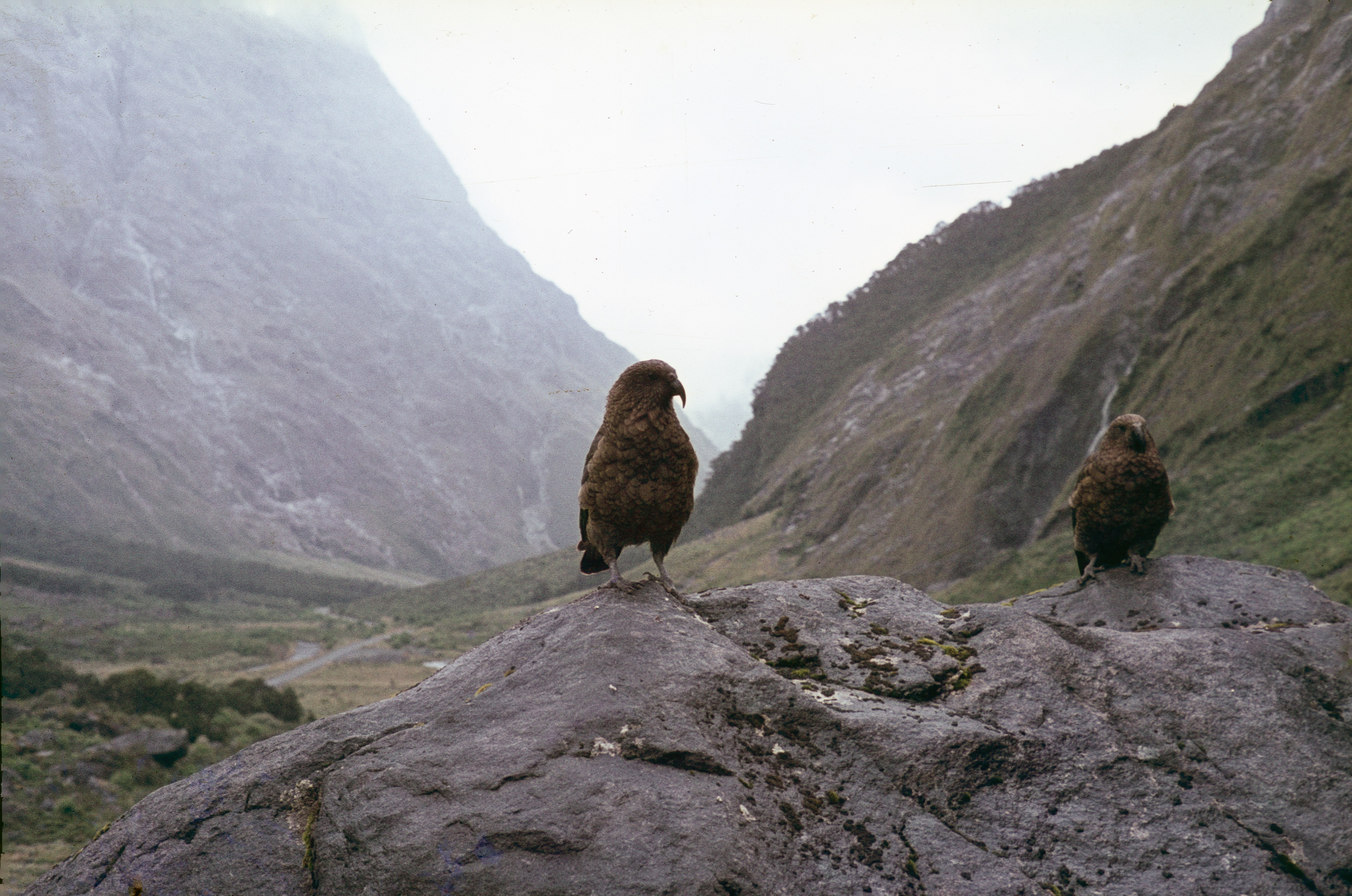 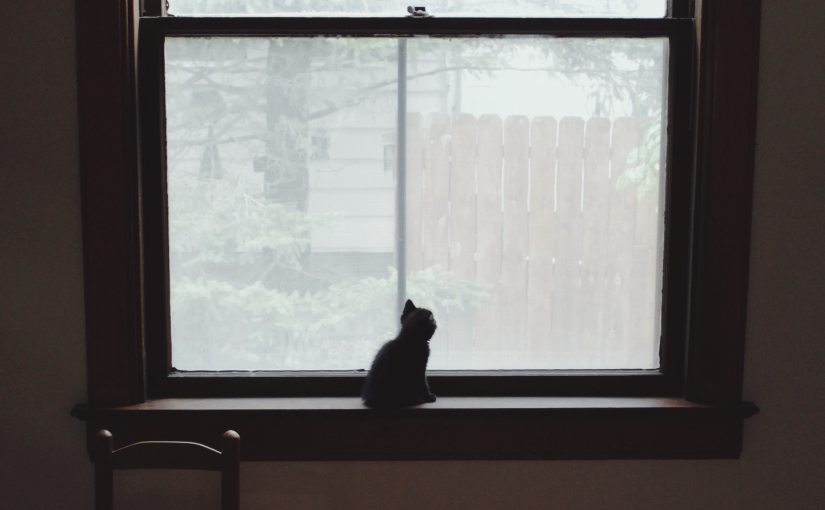 The gin is running out at the liquor store
flour, pasta, rice and vogels bread fly from shelves
We must pickle our lives to see out the storm
like bottles of wine on endless revolving racks
brewing notes of boredom and bickering, potentially,
sweetened by patience and kindness, hopefully.
subtle hints of blueberry muffin

After the last suppers
After the last coffees
Students arrange last night trysts with lovers
before homing back to packs of their own kind.

Each wolf pack must cosy down into its own burrow
birds into nests, hobbits into holes and badgers into setts
hunkering down till the coast is clear.
Capitalism might be munted by the time it is.
We prepare for a winter hibernation even as the sun shines
like Robbie Burns’ wee sleekit timorous creature
or moomintrolls in November

We try to be sensible ants when grasshoppers are more our style
The dog thinks it’s wonderful; we all stop going away the whole time,
The cat stretches a soft paw up to my chin

We can talk to other burrowers.
What are you doing in your burrow?
Are you fighting yet?
The lawns will grow and our hair!
We are the glassed in cells of one vast body turning in space
a whole world of shining orbs like street lamps

Meanwhile,
watch the sunrise
watch the sun set
hear the tui gorge on fruit up in the kahikatea –
croaking and whistling
rain, sun , cloud, stars
the Earth is still doing its thing
Observe closely for comfort,
stillness
This is a restful apocalypse
sunshine and birdsong within a storm of death
The earth heaves a sigh of relief
pleased to have some respite from our relentless busyness. Thick moose moss grows in Fiordland
in the probable absence of any moose
Waterfalls of moss,
Oceans of it (how can there be so much)
Pungent groves of seaweed in the air
A heavy matrix catching water droplets
Like treeish stars
– Look, you’re floating in it –
Wafting in green light, breathing green mer-light
in half-mixed paint pot underworld hues
An inside out pond tentacled with spongy fingers
holding water for the mountain.


Do participate in the activities on offer:
try swamp dancing – balancing on a sinky waterlogged raft – hold those soggy boots upright or whoops – capsized again.
Flop on about the comfy mattress if you like waterbeds
(not so good for finding dropped tent pegs or hair ties ever again)

The moss goes down forever –
reach an entire arm into billowing waves
Will there indeed ever be firm ground?
Dark watery pools and caves hide, depth uncertain,
Snuggled into coves of beech tree bole or craggy bays of roof plate – all gloomed with strange faces and forms
Welcome to Spookers


Dive into the clear cold Iris Burn as it dances puckishly through the story…
but not for long….
Fumble through the layers of fur coat like a Narnia wardrobe
– outcome iffy –
will it be rough granite, slithery root or entish armpit?
Mostly your weight settles on something like mattress springs and you’re on your way just fine…


Ghosts of trees and bits thereof
shoulder in under the minty duvet like piles of dirty washing or a cat.

Half dying or losing arms and legs doesn’t matter much in tree land.
You’re still part of the family, part of the game
no need to feel left out!

But footfall is unpredictable
Lean just there, and it’s into the pit for you!
The seat of my overtrou needs blister tape now  – they’ll never be the same.
Oh it’s all a bit tiring by the end of the day –
but here’s a nice sandy river bank for the red tent.

There be angel visitations, here,
in the silence,
in the upland wilds
As I wash socks by night, all seated by the burn,
Sleek little porpoises – beaks thrust forward like drink bottle spouts
dipping their heads
What do they eat in this pristine water?
The pairs keep touch with a sweet lisping whistle
whio,     whio….
Answered by a quick
– Clack clack clack clack –
from the percussion section-


They scare an anachronistic shag up onto a branch
Snaking it’s long beaked head on its long neck-
in annoyance
Their universe is not mine – these angels
They barely notice my presence
focussed solely on clear water
and each other
sliding by my world … and vanishing.